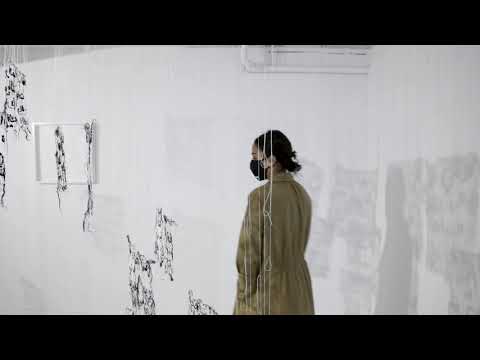 Maw6ini is an audio visual installation that simulates the internal experience of the Arab diaspora in the west through their appropriation of the latin alphabet.

The series involves typographical artworks spanning across embroidery, paper, thread and video based on the anthem Mawtini (homeland) by Palestinian poet Ibrahim Touqan- a song commonly heard in the homes of Arab families.

The Arabic lyrics are phonetically represented in Latin letters and symbols, a method of communication that surfaced with the rise of online communication platforms and the limited access to arabic keyboards. This appropriation is used as a metaphor for the resistance to epistemicide from oppressive colonial systems of power.

LINK TO MAWTINI, THE ORIGINAL ANTHEM BY IBRAHIM TOUQAN 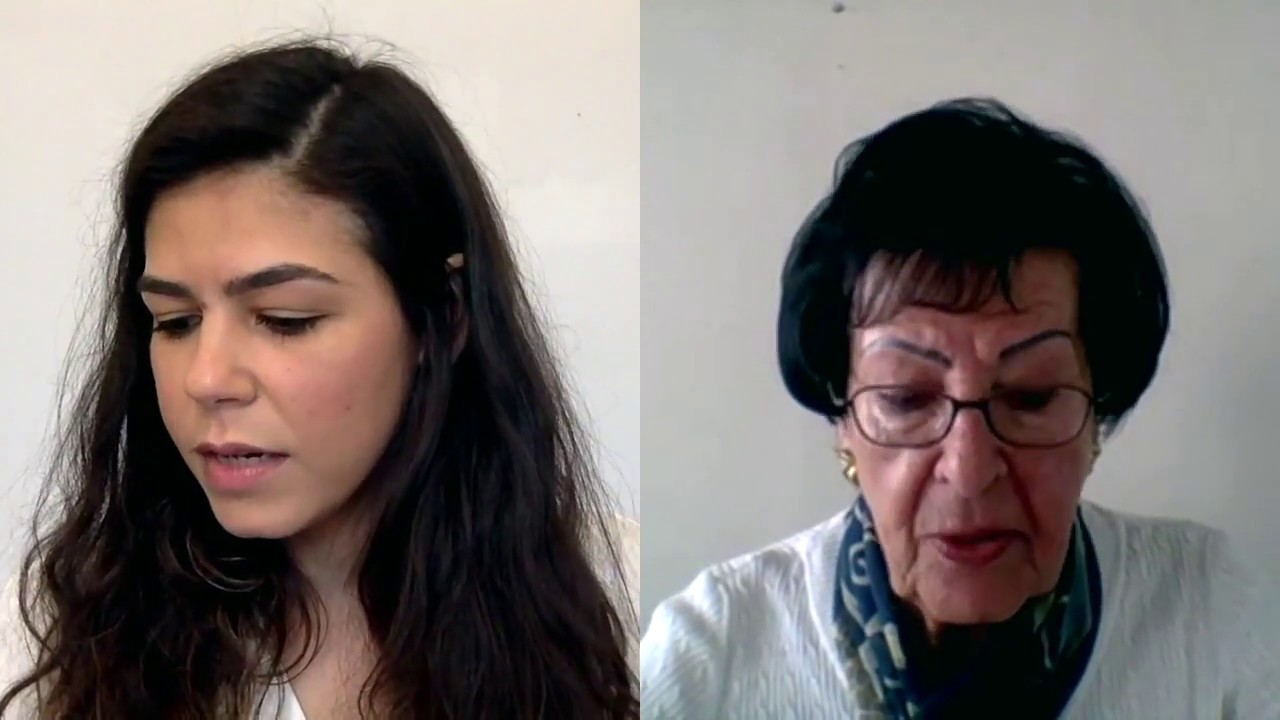 On a cloudy Wednesday afternoon, I am sitting in the Project Space intrigued by Samar Hejazi’s meticulous process of installing her solo exhibition Maw6ini. Climbing up and down the ladder, she is hooking strands of fishing line diagonally across the room, and on each, hanging small textile squares. Each fabric piece is composed of fragile, loose, gridded threads. Hejazi mentions during our conversation that the threads represent Palestinian diasporic connections, and the layered embroidery its people. She adds that it is the people who are holding the structure together- carrying with them the memory of a land The embroideries are all composed of excerpts from a renowned Palestinian poem, entitled Mawtini. On the far side of the room, one can observe that the words are stitched in Arabic characters, and on the opposite side, in its Latin counter-part. However, if the visitor isn’t fluent in Arabic, both versions are illegible. The translation into Roman characters is a hybrid form of text, interweaving letters and numbers that are phonetically mimicking Arabic sounds. Between the rows of hung fabric, there is a monitor featuring a video recording of a Skype conversation between the artist and her Taita (grand-mother). Along with the video and textile works, the artist has included a musical version of the poem.

Maw6ini, also known as My Homeland in English, was written by Ibrahim Abd al-Fattah Touqan in 1934, during the British occupation of Palestine. The struggle against what was called then, the British Mandate for Palestine, was a direct consequence of the fall of the Ottoman Empire as well as diplomatic agreements between the British, French and Jewish communities, all of which also coincided with the end of World War I. Touqan’s patriotic poem rallied masses in the attempt to regain territorial and political control, fuelling the Arab revolt of 1936-1939. Recognized as the Palestinian nationalist hymn, Mawtini inhabits the diaspora’s imaginary through generations, connecting a scattered population with a common historical thread. Interestingly enough, this poem has also been adopted by Iraqis as their National Anthem in 2003, interlocking time, space, and histories while unifying shared socio-political struggles. Although politically engaged and strongly nationalistic, this text is contextualized differently in this exhibition. Here, it does not work as a symbol of patriotism or as a tool to denounce the current Palestinian condition, but rather it functions as one of the main markers of Hejazi’s multi-layered identity. This iconic script was taught to Samar by her grand-mother at an early age, thus informing her relationship to the Arabic language as a Canadian-Palestinian.

Taita, or more formally known as Siham Dabbagh, is a community knowledge keeper, residing in Jordan. Dedicated in sustaining the Palestinian culture for future generations, she is to the artist at the root of the story, the one who is passing down important information in her family. Hejazi claims that culturally, knowledge transfer is female. This remark enhances the understanding of the materiality of the textile components in her installation. Embroidery as a historical symbol of domesticity and femininity expands on the notion of feminine gatekeeping while serving as a powerful mnemonic device.

In conversation with the textile work, the video focuses on the linguistic side of memory and cultural identity. Hejazi believes that language is a window to one’s culture. The ways in which language describes an emotion, an action or an object is very telling of the community’s state of being and shared values. Therefore, as a person speaking Arabic, English and French, the artist navigates more than one culture, more than one state of self. This concept is reinforced by the recorded conversation with her grand-mother. In the video, Samar is reciting Mawtini while simultaneously attempting to translate the verses in English. Both she and her interlocutor are struggling to find the right words to faithfully communicate the sentiments described by Touquan. In this process linguistic nuances appear to be at risk of losing the essence of the text, creating tension. Samar strokes her hair, subconsciously relieving stress when the proper English word is at the tip of her tongue. Sometimes the effort in shifting from one language to another is so exhausting that artist lets a quick, “anyway,” slip out, as she feels stuck in finding the perfect word. Moreover, at times, a hand gesture becomes an outlet to uncover the proper term. While watching the video, I can’t help but wonder; what is at stake when translating material culture to ensure accessibility and cultural sustainability? What is erased, what remains, and what is added?

The same line of questioning sticks with me as I try to decipher the verses formed of letters and numbers. Hejazi informed me that this type of communication is specific to the Arabic diaspora when conversing on chat forums or via texting. With the apparition of platforms like ICQ and only having access to English keyboard, certain linguistic sounds can’t be replicated with the Roman alphabet. Consequently, the closest shapes to the Arabic version were found in numbers, inventing a new type of written dialect. Although normalized, this method of translation was picked up by the artist as a metaphor for carving one’s space between different worlds, whilst embracing this in-between-ness in a fluid and creative way.

Many artworks by diasporic artists are characterized by a perpetual state of longing and a haunting desire to belong somewhere, to fit within a linear-narrative. What is proposed here is an embrace of non-linearity. This notion is not presented as the grief of never finding inner peace, but rather as an owned way of navigating the world. Through this exhibition, Hejazi delineates a personal cultural landscape hinting to abundance instead of absence and lack. Despite the frustrations in navigating her multiple selves and their associated language, she mends with patience each part of her personhood, as she has carefully threaded through the installation Maw6ini.

Maw6ini is an audio visual installation that simulates the internal experience of the Arab diaspora in the west through their appropriation of the latin alphabet.The...